In 2014, approximately 4 million people in the United States were infected with hepatitis C virus (HCV).1 According to the Centers for Disease Control and Prevention (CDC), acute HCV infections reported in the United States increased approximately 3.5 times from 2010-2016 (from 850 to 2,967 cases).2 The speculated reasons for this massive increase have been due to increased intravenous drug use (IVDU) as well as more specific & sensitive testing.

There are six genotypes of HCV that have been identified; but of these six, only three make up 97% of HCV infections in the United States.1 These three genotypes include Type 1 (both subtypes a & b), Type 2, and Type 3. HCV was initially discovered in 1989 and since then, a search for a cure has become imminent as HCV plays a major role in the development of chronic liver disease, cirrhosis, hepatocellular carcinoma, and commonly ends in the need for liver transplantation.3

Multiple medications have been proven to treat and/or cure of HCV. A cure is defined as a sustained virologic response (SVR) resulting in an undetectable HCV RNA, 12-24 weeks after treatment is completed.1 In the past, a medication called interferons were used to boost the immune system and attack HCV to defend the body; but in the 2017 AASLD/IDSA Guidelines, interferons are no longer recommended in the treatment of HCV.4 Ribavirin has also been used for acute HCV in the past, but now is only indicated for chronic cases of HCV.7 With both interferon and ribavirin, virological response did not often exceed 50%. Since 2014, four once daily HCV medications have been FDA approved for the treatment of acute HCV in naïve patients that exceed a virological response of 90% after 12 weeks of therapy.4

These more novel hepatitis medications consist of multiple drugs with differing modes of action. There are three classes of drugs that are used to treat HCV and they are called direct acting antivirals (DAA) because they directly attack the HCV genome and replication process.4 These three DAA classes include: NS3/4A Protease Inhibitors, NS5A Inhibitors, and NS5B Polymerase Inhibitors (Nucleoside & Non-Nucleoside).4 All of these medications inhibit replication of HCV in the host cell, stopping the life cycle and preventing its transmission to other host cells. Below is a picture that further explains the mechanism of action of each DAA along with each HCV drug and its corresponding DAA class.5 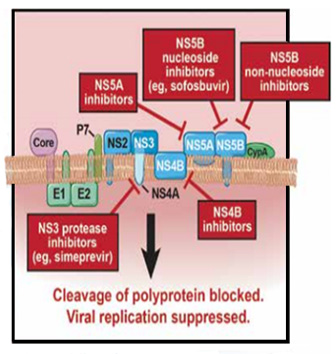 As mentioned previously, there are four HCV medications6 approved by the FDA that are one pill taken once daily and can result in cure. These medications include Harvoni (ledipasvir/sofosbuvir), Zepatier (elbasvir/grazoprevir), Epclusa (velpatasvir/sofosbuvir), and Mavyret (glecaprevir/pibrentasvir). Harvoni was approved by the FDA in 2014, Zepatier and Epclusa in 2016, and finally Mavyret in 2017. This is relevant because the two more recent drugs, Epclusa and Mavyret, treat all 6 genotypes of HCV while Harvoni and Zepatier are both first line therapy for genotypes 1 and 4.7

Unlike their differing genotype coverage, side effects for all four of these medications are quite similar. The most common side effects include headache, fatigue, and nausea and the instances for these side effects are approximately 16%, 13%, and 9%, respectively. Other more severe side effects (anemia, diarrhea, insomnia, and irritability) have been reported with these medications but only in combination with interferon or ribavirin as well as with prolonged therapy between 16-24 weeks.5

According to current HCV Guidelines, Harvoni, Zepatier, and Epclusa require 12 weeks (84 days) of therapy.7 Mavyret can be either 8 weeks (56 days) or 12 weeks of therapy depending on the patient’s baseline liver disease.7 Unfortunately, considering both the high cost of medication as well as the long duration of therapy does not allow all patient’s to receive treatment. Harvoni and Epclusa have generics available for patients, and the Brand Name options of Zepatier and Mavyret are thankfully in the same price range as the other generic options. The cost of one tablet for these medications is as follows:6

Because these medications are very costly, a 12-week drug treatment regimen of therapy ranges from $16,800 to $113,400. This is a problem. Many patient’s simply do not have this amount of money to spend on one prescription. This further leads to controversial discussions because as mentioned earlier, HCV plays a major role in the development of chronic liver disease, cirrhosis, hepatocellular carcinoma, and commonly ends in the need for liver transplantation.3

Patient assistance programs require paperwork completed by the patient as well as the prescribing physician. Copay cards only work for Brand Name medications and most commonly require private insurance as a primary payor (not government funded insurances such as Tricare, Medicare, or Medicaid). For more information, check out these websites:

If you need help affording other prescription medications, visit www.WellRx.com. Many prices are lower than insurance copay costs!

Delirium in the Elderly

Lybalvi: A New Treatment for Schizophrenia and Bipolar Disorder