Your body has a number of glands, but the thyroid gland is the small gland at the base of your neck that makes hormones to regulate your metabolism. This impacts your body’s metabolic rate (how you burn calories) as well as heart and digestive function, mood, and more. But what happens if something impacts the thyroid?

How Does the Thyroid Work?

First, the hypothalamus releases TRH which activates the pituitary to release TSH.1 This in turns activates the thyroid to produce and release T4 and T3 into the body but at an approximately 14:1 ratio, with T4 being 14 and T3 being 1.2 Then T4 and T3 bind to proteins and travel to other tissues in the body. There, the T4 will be changed to T3 by removing one molecule iodine.1 This is important because T3 is the active thyroid hormone unlike T4, which is inactive; T3 allows the body to control metabolism, temperature, and heart rate.1 Finally, the T4 and T3 in the body cause a negative feedback loop to the hypothalamus and pituitary. This can make the hypothalamus and the pituitary produce more hormones when T4 and T3 are low or produce less hormones when T4 and T3 are high.1 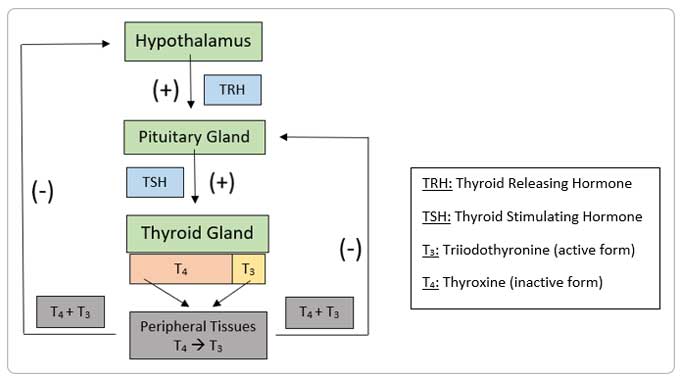 What are the Causes and Symptoms of Hypothyroidism?

Hypothyroidism is most commonly caused by an autoimmune disorder which is when the body’s immune system attacks its own tissues rather than infections. Because of this, the autoimmune disorder causes a decreased amount of T4 and T3 being made.3 Other causes, although unlikely, include a low amount of iodine through diet, removal of the thyroid, radiation therapy for cancer treatment, and certain drugs (amiodarone, lithium, iodine, and rifampicin).

Signs and symptoms of hypothyroidism are commonly dry skin, sensitivity to the cold, constipation, poor memory, fatigue, weight gain, puffiness around the eyes, and a slowed heart rate. These signs and symptoms are highly suggestive of hypothyroidism, but alone cannot diagnose this condition. Diagnostic measures most commonly include high TSH levels and low T4 levels.

What are the Treatment Options?

The most common T4 replacement medication is levothyroxine, and it is recommended as the first treatment option for hypothyroidism.2 Although it is not the active form (T3), it can be made into T3 in the body’s tissues and is generally well-tolerated by many patients. Benefits of levothyroxine include normalizing thyroid function, once daily dosing, few side effects, low cost, and safety in pregnancy.2 But one thing that is very important and specific about levothyroxine is how it is taken. Levothyroxine must be taken on an empty stomach so that it can be appropriately absorbed by the body.3 This is easiest to accomplish in the morning right after waking up, at least 30 minutes before eating breakfast; but, it is possible to take levothyroxine before bedtime as long as it is 4 hours after eating.2 Levothyroxine must also be taken separately (approximately 4 hours before or after) from products such as calcium, iron, and antacids that contain aluminum or magnesium in order to optimize its absorption and efficacy.3 These products are commonly in the form of vitamins or supplements, as well as Tums, Mylanta, Milk of Magnesia, Alka-Seltzer, Maalox, and Rolaids.

Some medications used to treat hypothyroidism have a mixture of T4 and T3. Unfortunately, there are many differing studies with different T4:T3 ratios and have unclear results.3 But, many of these clinical trials do not show benefit of T4 and T3 over T4 alone (levothyroxine).2 It has been reported that few patients taking levothyroxine alone still experienced signs and symptoms of hypothyroidism, although their TSH level was corrected to its normal value; and it has been discussed that these patients could potentially benefit from combination T4 and T3 therapy, but evidence is limited.2,3 Overall, levothyroxine remains the standard of care when treating hypothyroidism, with combination therapy of T4 and T3 only being considered after a patient tries levothyroxine and it does not work effectively.2

This type of hypothyroid medication is also a combination of T4 and T3 but instead of being synthetic (made from chemicals), it is naturally obtained. This is because it is derived from thyroids of animals, particularly domesticated pigs.2,5 The common name of this type of medication is Armour Thyroid.5 The T4:T3 ratio is always 4:1, unlike the natural body’s ratio of 14:1.2 This can lead to an increased level of T3 at once and can result in adverse effects including increased heart rate and anxiety.2 But, there was one minor study completed that reported results of patients preferring desiccated therapy over levothyroxine due to decreased symptoms of hypothyroidism.5 Because this study was small, did not use appropriate questionnaires, and did not assess safety, it does not warrant its use over levothyroxine for hypothyroidism.2 Natural desiccated therapy falls into the same category of combination therapy . It should only be considered for patients who have tried levothyroxine and did not correct his/her thyroid function.2

Delirium in the Elderly

Lybalvi: A New Treatment for Schizophrenia and Bipolar Disorder